<< Back to The Best Cheap Nerf Gun For Kids

The Nerf Stryfe has had a reputation as a great blaster with with an Achilles heel – it would sometimes jam and not fire. It didn’t happen all the time though and there are plenty of mixed opinions floating around.

The general consensus to take it from a “great” blaster to “awesome” was to remove the internal trigger lock to stop the Stryfe jamming.

The trigger lock is a small “L” shaped piece of plastic which stops the trigger from moving if a dart isn’t in the firing position. Good in theory, except that Nerf darts are soft and sometimes the dart wouldn’t lift the lock entirely clear, causing it to jam the trigger.

Here’s what the trigger lock looks like, thanks to the good folks at Nerf Haven. I bought a brand new Stryfe in October 2016 and as soon as it arrived I planned to remove the trigger lock just to avoid any jamming hassles later on. The lock can be seen easily by removing the dart clip and looking straight into where the clip is inserted.

I got a big surprise when I looked into mine and saw this: 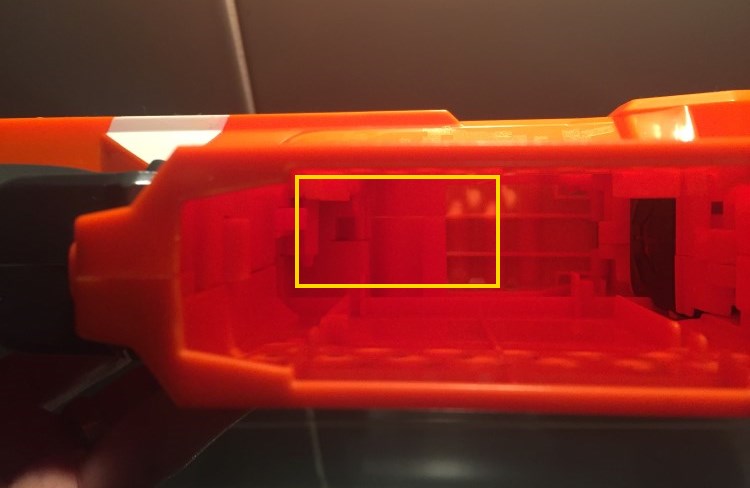 The yellow box shows where the trigger lock is meant to be – except there’s nothing there! Perhaps Hasbro decided the trigger lock was causing more problems than it solved and has been removed from production? Who knows, but this revelation immediately boosts the Stryfe to 5 stars right out of the box for me.

If you’re lucky like me there’s nothing else to do but enjoy your blaster without fear of your Stryfe jamming. If not, read on…

If you already have a Nerf Stryfe and find that sometimes you can’t pull the trigger, the trigger lock is the most likely reason. Thankfully, removing the offending piece of plastic isn’t difficult and takes only 5-10 minutes. I took mine apart to show how simple it is.

2. Grab a screwdriver. It needs to be thin and long enough to reach into the deeper recessed screw holes. I used a jeweller’s screwdriver with #1 size phillips head.

3. There are 15 screws, but only 14 need to be removed. Leave the screw in the lower tactical rail in place (circled below). 4. Open the top jam door, then carefully separate the halves to be left with this. The arrow shows where the trigger lock would be which could then be lifted out (refer to the Nerf Haven image above). 5. To reassemble, carefully refit the side of the blaster with the 14 screws and don’t worry about your Nerf Stryfe jamming again!

If you don’t already have a Nerf Stryfe and are curious about how much they cost, you can see them here on Amazon. It’s a great blaster for the money.